I am pleased to announce that my Introduction and Allegro Brillante (Op. 41) for flute, oboe and piano has been published by Forton Music, a respected publisher of music for woodwind and brass. Hopefully this is the start of a fruitful relationship with them. Forton also publish works by my friends Cedric Peachey and Liz Sharma, some of whose works I have performed.

Forton have made a video where you can see the score while hearing a performance of the piece. The music can be purchased here.

The recording of the first performance in 2009 can be heard here.

I’ve completed a significant new work. Entitled ‘A Still, Sad Music’, it is a setting for choir, orchestra and (optional) organ of lines 90-113 of ‘Lines Composed a Few Miles above Tintern Abbey’ by William Wordsworth.

I had to consider how to make a demo of this. With instrumental pieces I can just use the audio from the scoring program, but in this case the words are important, which of course cannot be synthesised. My solution is to make a video combining the audio with a scrolling display of the vocal, organ and string parts (the words would be too small if you saw the whole score). This demo is on YouTube.

In the video the full orchestration may be heard, but only the choral, organ and string parts are seen.

The work could be performed with choir strings, harp and timpani only, or with an incomplete group of wind instruments, particularly if the organ were used. With full orchestra, the organ part would be optional.

Here is this new work, mentioned in the last post, in a realisation made by Dorico and Note performer.

I will be playing A New Wedding March, a work I wrote for my brother’s wedding about a decade ago, on the piano, and  also a piano arrangement I have made of one of my orchestral marches, Pomp and Circumstance (Op. 23).

This will be part of a concert also including a new flute sonata by my friend Martin Jones, and works for piano and vibraphone by Derek Foster and Michael Regan, pieces for cello and piano by Peter Openshaw and Alan Hilton. and a piano piece by Peter Terry. Admission will be free, with a collection at the end.

The concert is organised by London Composers Forum in collaboration with Harrow Summer Music Festival.

Premiere of March of the Pioneers (Op 58)

The idea of this concert is a journey round the world, with each continent or region represented by a new piece by a different composer. My contribution is a piece representing North America, entitled March of the Pioneers (I told you I was obsessed by marches). If it in any way represents the history of America, then the Native Americans do not come too well out of it. The melodies doffs the cap at the swagger of Sousa and the syncopations of Joplin, and are orchestrated in a style somewhere between Elgar and the Loony Tunes scores of Carl Stalling.

I will be playing, with other performers, my own compositions and other contemporary works for one and two pianos, in a concert on Friday 30 November at 7:30pm, at the Church of St Mary Magdalene, Munster Square, London NW1 3PH.

There will be another chance to hear my ‘Grand Concert Rag’ Marta, duet version, played by the dedicatee, Marta Mitchell, and myself.

The ‘grand finale’ will be a two-piano transcription of my orchestral piece Ceremonial March No. 1, specially written for this occasion, played by myself and Alison Doubleday.

We will have the use of a splendid Bösendorfer 280VC piano (unique in the country), and an almost equally splendid Yamaha concert grand, both on loan from Marksons Pianos. The two together should be a spectacular sound in the acoustic of this fine, spacious Victorian Gothic church.

Here’s the poster, and a little preview of the two-piano Ceremonial March. 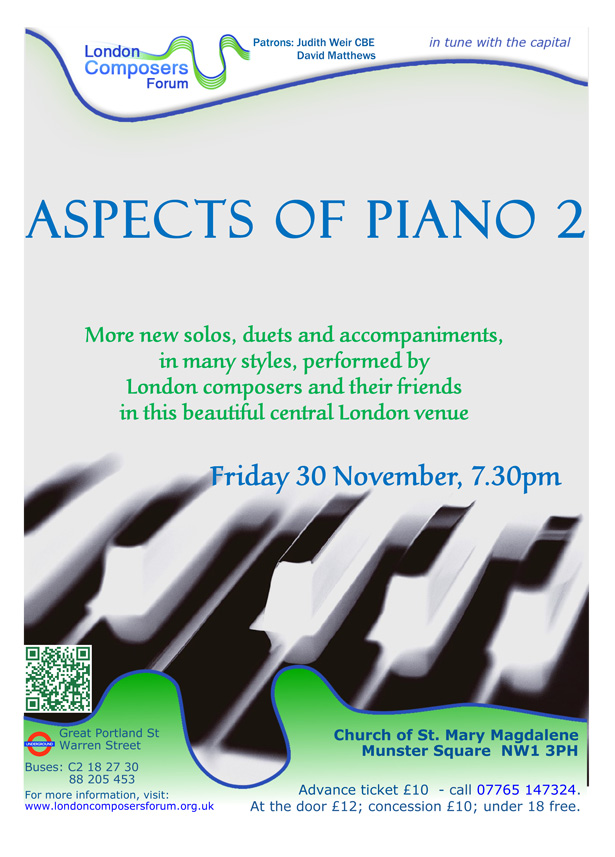 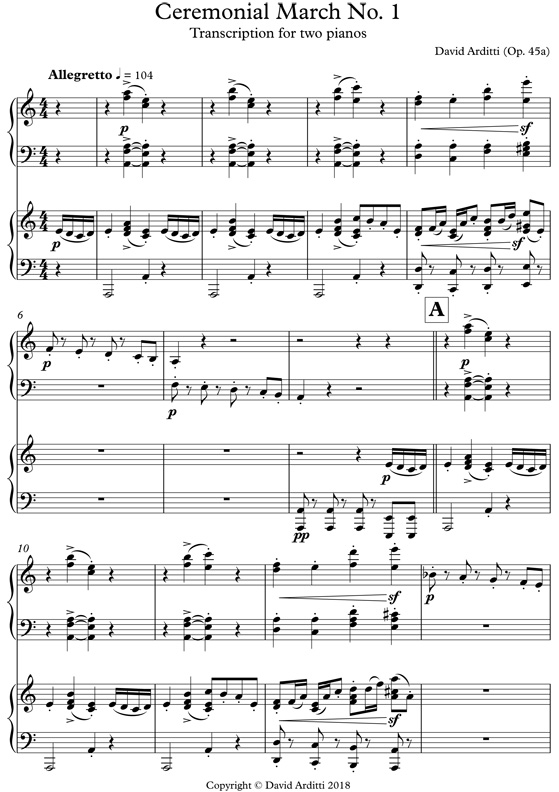 The second performance of Chamber Music (Op. 20), and the first with woodwind, in addition to the original string quartet accompaniment, occurred on 2 February 2018, at the Tea House Theatre, Vauxhall, London. This was about a third of a concert entitled ‘The Art of Song’. The soloist was Ezra Williams. A more or less capacity crown was present, plus assorted cats, and we were graced by the presence of Dame Judith Weir, Master of the Queen’s Music and  Patron of London Composers Forum.

The next concert date is a piano recital at St Mary Magdalene, Munster Square, London NW1, on the evening of Friday 18 May 2018. Programme TBA.

The next concert featuring my work is likely to be 7:30pm on Friday 2 February at the Tea House Theatre, 139 Vauxhall Walk, London SE11 5HL.

This will be a concert of songs and vocal works by various contemporary composers. My contribution to it is likely to be the largest, as I am working towards doing a revival of my Chamber Music (Op. 20), a 30-minute song-cycle for tenor and string quartet on poems by James Joyce. Watch this space for more details.

The February concert that contained my Fantasia on a West-country Tune, arranged for wind quintet, will be repeated at 7:30pm on Friday 15 September 2017 at Lauderdale House, Highgate Hill, London N6 5HG. The performers will once again be the London Myriad Ensemble.

The concert is promoted by London Composers Forum, and generously supported by the RVW Trust. 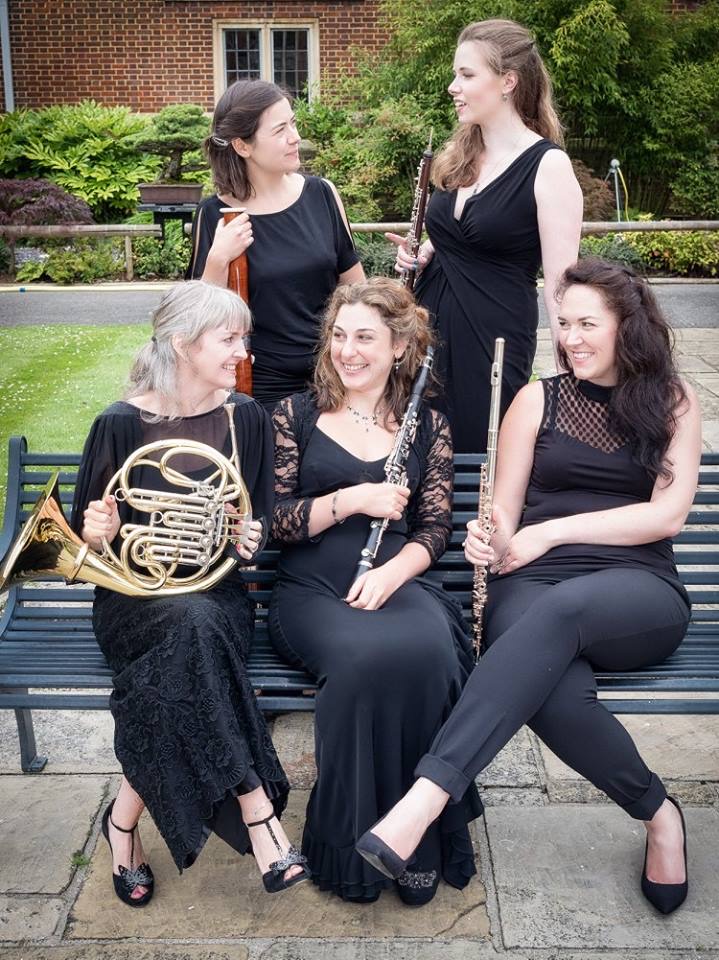 I’ve been collecting some of the recordings of my choral music, and making videos of them where they are combined with the text, which can be read while listening. These can now be found here. I’ll be adding to this page as time goes on. Since choral music has been a large part of my output, this is a significant addition to the site.

Here is a video made from the performance of the new wind quintet version of Fantasia on a West-country Tune, (Op. 36a), recorded on 17 February 2017 in the Church of St Mary’s Riverside, Putney, London. The players are members of the London Myriad Ensemble.

This work is also available in two brass quartet versions: either 2 cornets, tenor horn and euphonium (brass band transpositions), or 2 trumpets in Bb, horn in F and tuba (orchestral transpositions) from Music for Brass. Additionally there is a version for clarinet, alto saxophone and two trombones. Any enquiries about this or the wind quintet version to me.